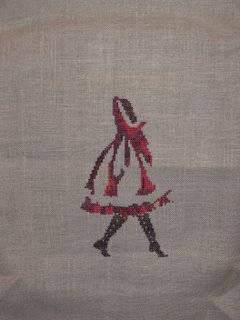 As you can see above, I've been working on Mirabilia's Christmas Elf. All was going along splendidly. Until this afternoon. When I realized that apparently the piece is supposed to be stitched with two threads. Which the instructions don't say. And I only realized when I went to add the next colour and realized it was a blend.

So now, I have to make a decision, and I thought I'd ask my readers what they suggest. The way I see it, I have three choices.

1) Restart (I do think there is enough thread)
2) Continue stitching using two threads for the blend and one for everything else. This will make the blend (which is already an odd mixture) stand out more.
3) Stitch the section with the blend using only one of the two threads. This will leave a section that looks like it really doesn't blend well.


So what does everyone think?
Posted by Heather at 5:15 PM

What about going back over the stuff you've done with one thread already with one more thread, but just doing the top half? You'll get two-thread coverage above, although your bottom half might look thin, depending on how visible it is. At least that way you don't have to frog it all out.

I don't know what I'd do. Would it drive you nuts to re-start it? I'd be worried about having enough thread, though. Did the kit give you DMC numbers or made up ones? I have some conversion charts lying around for a few companies (Dimensions, Bucilla, maybe another).

Jenn's idea might work better, though. It depends how much of a perfectionist you are.

Thanks to Jenn and Joanna for the thoughts. Unfortunately, the project only comes as a kit and it uses hand dyed threads. I have got enough to start over of the colours I've used since I've stitched all of those colours needed and haven't gone through a third of them. I like Jenn's suggestion, and will keep it in mind for DMC stuff (hopefully never to need it, but you never know). Because they are the hand dyed varigated though, it won't work to just stitch over the existing stuff. I think I'm pretty much resigned to having to restart it. But I am NOT ripping out all I've done. I'll pick up another piece of fabric instead! I had hoped one of my Silkweaver Trick or Treat pieces would work, but it's too brown/tan.

AppValley Apk android is the best alternative for Google play store on android phones or devices. Appvalley is the right junction for getting all the free apps, games and their mods easily.