Amazing what a four day weekend can accomplish... 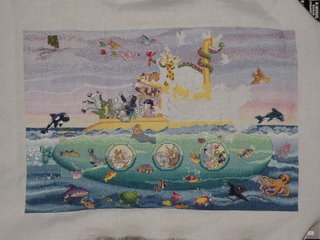 That's a LOT of stitching accomplished in one weekend, four days or no! I might actually have a chance at finishing this in time for Christmas after all. We're heading away next weekend for three days (I can't wait), but I don't think I want to bring it and risk having something happen this close to finished!
Posted by Heather at 10:14 AM 3 comments: Links to this post

We had snow this morning. Nothing I'd even call a dusting, and it certainly melted as soon as it touched anything, but we had snow!
{giggles maniacally}

I've gotten a lot of stitching done on Noah's Sub the past few weeks and wanted to actually post a photo of it to this blog. I'll be updating it to the xvart website in the near future too... I'm on the LAST PAGE! Wohoo! I've gotten most of the yellow for the sub done, and the periscope. I did one colour of the sky across the top just to make sure it would meet up, and it did. I was very happy about that!


Other than that, not a lot to tell. We hosted gaming on Saturday, as usual and on Sunday went out to see the new Harry Potter movie with Jen, Joe and John. It was fun. Brian's in the middle of trying to organize an insane amount of gaming over the upcoming 4 day Thanksgiving weekend. We have players coming from two different states, and one from England. Hi Hayden! We miss you! The Y is going well, I'm branching out into more different types of exercise, and the results are really starting to show. I'm down almost 20lbs since the middle of August! Wohoo!

Gotta run since I'm at work. The image upload to the blogs doesn't work from my mac (atleast not that I've figured out, I haven't tried too hard) so I post the photos from work which is all PC's. 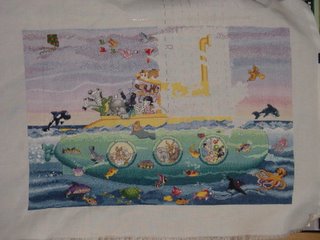 Posted by Heather at 1:43 PM No comments: Links to this post

Can you see the difference? 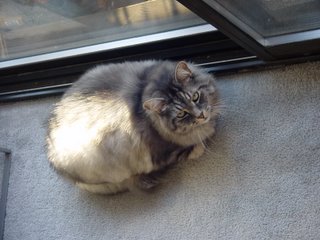 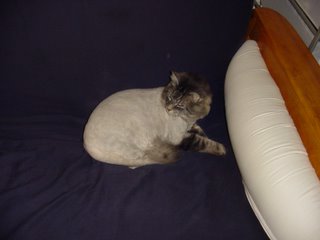 Yep, Percy's been shaved again! I'd feel bad, but if he's willing to lie there for the groomer, for all intents and purposes saying "Go for it!", my allergies will thank him!
(Note: Both photos were taken from about the same distance away, and with the same lack of zoom. He really is that much smaller without his fur!)
Posted by Heather at 3:07 PM No comments: Links to this post

Reasons why I love him

Because my husband will run me a hot bath after my workout at the Y, then spend the time I'm soaking in the tub playing my character in a video game so I can have some money...(less than 500,000 to go for invincibility!) And being the dyslexic videogamer I am, I *need* the invincibility. I wonder how I managed to inherit that from Neil?
Posted by Heather at 8:55 PM No comments: Links to this post

Things I love about

Going home for lunch, having lunch ready when I walk in the door and getting a break and a rest.

Oh, and playing Lego Star Wars. That game should be banned for the addictive crack it is! We only picked it up yesterday, and Brian's through the first movie already.
Thanks Joe!
Posted by Heather at 2:39 PM 1 comment: Links to this post

Finally, today, November 14th, I have harvested the first edible tomato from my garden. Did I mention my tomatos sucked this year? There are a couple of others ripening now, but we're getting really close to a frost at night, so I don't know if they'll make it. Next year I'm going back to cherry tomatos!
Have a great day!
Posted by Heather at 8:41 AM No comments: Links to this post

I finally got the photos from our vacation posted. Click on the title to get there. They are currently unsorted, unlabelled and unculled, but they're finally up!
Posted by Heather at 2:20 PM No comments: Links to this post

I'm going to try to do more spurr of the moment shorter blog posts for a while and see how it works out. I keep thinking of/coming across things to put up here, but never seem to have the time to type out everything I want to say. So, I give you the less edited, less coherent, more frequent blog!
Well, we're in immigration paperwork hell right now, but it'll all come out in the wash. We have to get a ton of paperwork completed, need several documents from Canada, and need to find a "Civil Surgeon" to do our medical checks. Then we submit and wait for our interview, where we get interviewed (duh!), photographed and fingerprinted. Then we're allowed to stay! Until we find the surgeon, we won't know how much the testing will cost, but it shouldn't be too bad (fingers crossed).
We're in medical billing hell right now too. Brian had to go for some (expensive) tests. We checked with the lab that they take our insurance. They do. The lab gets a preapproval from our insurance to do the testing. No problem. He has the tests. No problems (on the tests either, so that's good news!). Now, weeks later, our insurance company is trying to claim that the lab is out of network (doesn't accept the insurance) and saying we're going to have to pay $675 of the bill. This sucks. It doesn't help that the only lady in the billing department doesn't seem to speak clearly understandable english. Fluent spanish, but that doesn't help me! I'm about ready to read them both the riot act. But it'll get sorted out.
Gaming is busy as always. We ended up hosting over 20 hours of gaming last weekend though, so Brian's in a bit of trouble over that. I really don't mind one day a week (Saturday), and enjoy when I get to actually play. But two long days is beyond pushing it. Sundays are supposed to be NO GAMING days. {shrug} But what's done is done, and the players had a fun, if overly challenging time.
Since I didn't get to do much else last weekend, I got lots of stitching done. There's an update at www.xvart.com/xsprojects.html And I got more done last night (the five smallest birds), so I'm getting really close to being on the last page. I can't wait to work on something for me for a change. I was bad and bought Dracolair's Phoenix (as I think I mentioned before). I've been good and not worked on it since the day I bought it though as I'm trying very hard to get Noah's Sub finished by Christmas. The chart for the Phoenix sucks (since you asked Joanna) because the 1/4 stitches are done by showing 4 reduced symbols in each stitch box and are hard to read. They're also so small that if I try to blow it up with a photocopier, all I get are vaguely symbol like smears. So I keep having to refer back to the original. Defeating the purpose of having a photocopy! The backstiting isn't shown on the main chart, but instead on the back of the chart page over a very light copy of the pattern. There are parts where it's really hard to tell where the stiches actually go. And the print on the chart itself isn't clearly printed, so it's all slightly smudgy.
That's all for now, I should get back to work. There's lots more news, but it'll have to wait.
Posted by Heather at 2:12 PM 1 comment: Links to this post