Was it wrong of us to laugh at poor Percy trying to see out the patio doors or at least figure out what was going on? 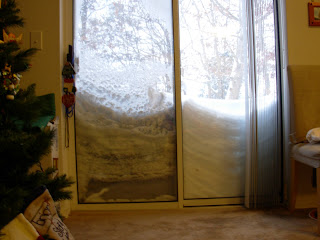 Out the same patio doors. The brown bits to the bottom right are the tops of our chairs, folded up and leaning against the table for the winter 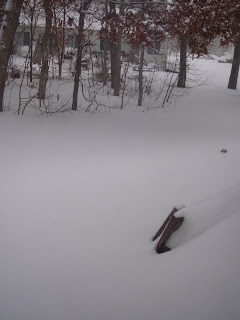 Brian wanted to make sure I knew which spot I parked my car in 'cause he wasn't sure he'd be able to tell from a quick look out the front window. 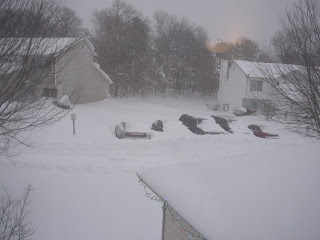 This window is the opposite side of the house to the patio door. And the drifts come up all the way to the sill! 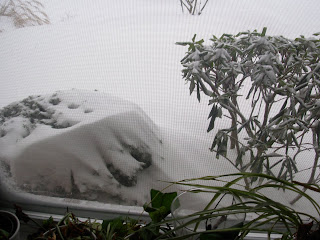 And last, but not least, don't you like my fabulous wrapping job on this present yesterday? 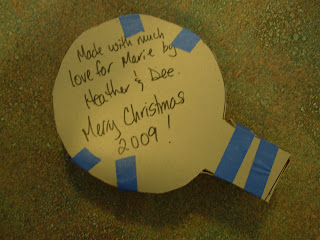 And as of noon today

The flurries have finally started!
Better late than never.
Wohooooooooooo!

It's kind of fun to do the impossible
- Walt Disney

I know most of my friends just shake their heads and say I'm nuts, but
I am so thrilled. They're forecasting up to 18 inches of snow this
weekend! I don't expect we'll actually get that much, but I'll post
photos if we do, and I am thrilled!
Posted by Heather at 6:43 PM No comments:

So, have we been busy? Yes. Abnormally so, even for us? Yes. Is this
truly something you didn't expect from me? No.

Going back to school is a great thing (I think) but it certainly has
cut down on the amount of time I have for hobbies, one of which is
updating this blog. I've found I'm spending ~8 hrs/week on the school
stuff just to keep up with lectures. That doesn't include time
reading the textbook, or working on assignments. Speaking of which, I
turned in all three of my term papers yesterday. Yes, you read that
righ, three term papers for one course. All due within a week of the
final. Which I'm taking Monday. Wish me luck. I know I'm better
prepared for it than I was for the midterm, but there is an incredible
amount of detail to be absorbed. In just this half term, we covered
40 techniques. All of which I need to understand how they work, what
they measure, in what range etc. I see a stack of cuecards coming.
Actually, I've started on them, which is how I know there are 40 of
them! The hard part is figuring out what needs the rote
memorization... Remind me again why I wanted to go back to school?

So, with that time sink, there went most of my crafting time. I have
one stitching project going, which is a Christmas gift, and so should
be posted soon, except it's been stashed somewhere from our madcap
trip home*. I'm really hoping I haven't left it at my MIL's house
because if I did, it certainly won't be done! I haven't been taking
time to stitch so I could get school stuff done. I've been so slack
on birthday cards this year it's disgusting. Maybe during term break
(three whole weeks off!) I'll premake a bunch of them. And my Google
Reader is just informing me I have >1000 things awaiting me... I'm
afraid to know how many more!

*Madcap trip home. So, my plan for Thanksgiving weekend was to have 4
days to study, write my term papers, and finish the stitchy gift.
Brian would be working a lot of it and I'd have the place to myself.
Except they've just changed his boss at Gamestop (another long story
there, grrrrrrrr) and Brian wasn't scheduled at all. So suddenly we
had a 4 day weekend, haven't been home since a weekend trip in April,
and wouldn't be able to go home over Christmas. Hrm… Well, I'd have
24ish hours in the car to study… and if I can buy my birthday present
early** I can use it to listen to lectures while driving, adding in
extra review… But we certainly hadn't budgeted for a trip home, and
hotels at home are EXPENSIVE if we want to stay somewhere you don't
have to worry about catching something from the sheets… Enter Mikey,
best friend from highschool and his awesome wife Jan, who out of the
blue offered for us to stay with them and their daughters at their new
house. A trip home, no hotel costs, fabulous downtime with Mikey,
Jan, ,L and M (as opposed to normal quick trips home where we don't
have time to visit with friends) and I was sold. As expected, it was
mostly a mad rush, but we had a great time and are very glad we went.
I even took part of a morning and got one of the three papers half
written at Mike's table. Mean Brian wouldn't let me go to Costco for
the chocolate run until I had. Grr. Not that it surprises me, but
Brian was astounded Mike's daughter L remembered Brian from the last
time we saw them. At Disneyworld two years ago when she was 3. It's
amazing watching them grow up. We were supposed to meet up with them
at WDW again this year, but then had to change the dates of the trip
so we missed them, and we were not happy about that aspect! When I'm
not posting by email, I have photos of all the neices and nephews to
share since we got to see all of them. Brenden seems like he's
finally recovering more fully from his case of H1N1. Fingers crossed.

**Yes, I chose my own birthday present. And bought it, opened it and
started using it before my birthday. Live with it mom! :P We'd
bought an iPod Touch before our last trip to Disney for Brian to use
on the plane. He's so terrified of flying it's nuts, and anything
that distracts is good. But we were already having to haul my
gigantic laptop (silly Florida schools go back in August. AUGUST!)
and didn't want to carry a dvd player along as well. Yes, we could
have used the laptop, but the battery isn't *that* great, even if it
does weigh a ton. Besides, the Touch has games, movies, music,
internet (wifi) and fun! Not to mention a great app with all the
Disney restaurants with menus and meal plan options in it. But then
we started feeling guilty about the cost. And were glad we bought it
from Costco since they (as expected) released new versions the week
after we got back. We returned the original one. And I've missed it
ever since. My lectures this term are all provided online, and
conveniently come in a format designed specifically for iPods. And my
slides are all .pdf's, which can also be accessed on the touch. So I
bought myself a shiny new 8GB iPod Touch for my birthday. I used my
$20 in GC's I'd saved, and a 10% off coupon I'd earned to make it even
more reasonable. Go me! I'd have liked the larger size, but we don't
really need it. As it stands right now, I've got half my term's
lecture videos, all the slides, an 800 page textbook, far too many
games, 1 movie, and ~650 songs on it. So Brian got to listen to all
17 hours of lecture from this half term during the drive to Canada and
back. His main comment: How do I keep the alphabet soup straight? :)

--
It's kind of fun to do the impossible
- Walt Disney