We had a blast at ConnCon. The con itself is very well organized and
run. Absolute kudos there. The hotel was great in all respects I
experienced, although I hear there were complaints. None from me and
Brian! Our floor was quiet, and it turned out we knew one of our
"neighbours" and he's a quiet guy. All was good on that front. The
bathrooms were kept clean (unlike a previous experience), there were
actually garbage cans in each room (this time!) and the staff were
helpful. I have heard a number of complaints about the restaurant,
but we avoided them by avoiding it. After $14 for a chicken ceasar
salad the last time we were at this hotel, we avoid it at all costs.
The salad was good, but not that good… Now, the Thin Mints Girl Scout
cookies on the other hand were great. Those kids must have cleaned
up! Every slot the kids were the ones who went around to collect the
tickets and reporting forms, and once that was done, they came around
with the "cookie cart". I think the last number I heard (several
hours before the end of the con) was that they'd sold 168 cases of
cookies. Happy, often hungry, gamers sitting at a table for hours,
talk about a captive market!
The gaming went well. I played one slot and had a blast. Namfoodle
and Brother John should not be allowed to play together, we get into
too much mischief! I also played a new card game that I think I'll
have to pick up called Three Dragon Ante. We had a blast playing it,
so it's going on the shopping list. My judging went well, with one
minor exception. The feedback I got was good and generally positive.
I can't really say that I liked judging in a con environment. It was
way too loud, and I have almost no voice left. I only got to run one
mod in one of the littler rooms (the rest were in the big ballrooms)
and that would have helped a lot. I much prefer to have more time
available to keep going with the roleplaying. I WILL NOT run an
investigative mod at a con ever again. I did generally do well with
my pacing and kept to within 30 minutes of slot end, and finished 3
within the slot time. Given I've had mods run 90 minutes past the
end, I'm quite happy with that aspect. I thought I could probably run
them in the time allowed, it's nice to have that confirmed. I have at
least one player who is NOT HAPPY with me over a "curse" he received
in the mod at the last slot. It's a blessing from a good deity. The
deity's own clerics are NOT going to remove it. Get over it.

I leave you with the ugliest female half-orc in existance. I admit responsibility for the clothing, nothing else! 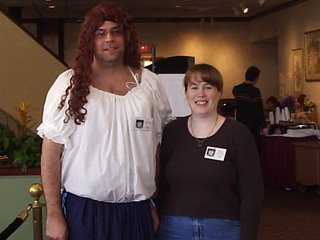 Hi Heather, thank you for your kindness. I have sent you an email, one has bounced back, so I've done a test one and one with the thread numbers.

My email is hevs1971@hotmail.com if for some reason you don't get them.

ConnCon sounds like it was fun! I'll have to add it to the list of potential cons. :)