I made Bloger choke. It posted all 10 photos on Friday, and then wouldn't even let me log in yesterday!
So... today I'm only going to post 5 photos at a time and see how that goes 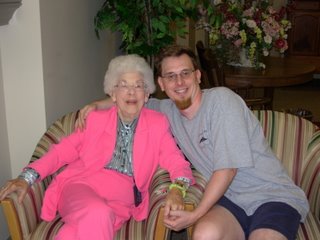 Saturday morning (Canada Day) we went to see Brian's grandma. She's a wonderful spunky 94 now, so we make sure we go see her every time we're anywhere near home. We spent a couple of hours just talking with her and relaxing.

Then we went to see the parade. Apparently Cambridge has one of the largest ones in Ontario. (According to the radio, anyways.) We were lucky enough to get a seat right at the very start of the parade. We could look down Bishop St where they were marshalling everyone, and see them start out on the route. It was a hot, hot day, and the parade itself was over an hour long. We had fresh cold water from Brian's dad's Pharmacy (diagonally across the intersection from us), and lots of sunscreen. Other than a really horrible incident with an asshole and his dog, it was a great time. I haven't been to the parade like that in years, and I really enjoyed just relaxing like that and talking with the people sitting around us. I took three million photos of the parade, so I'll probably put them up on my proper website. Okay, so that's a slight exageration, but only slight! I even managed to shoot some fairly cool video of the funky shriner cars! Not bad for playing with a new camera. 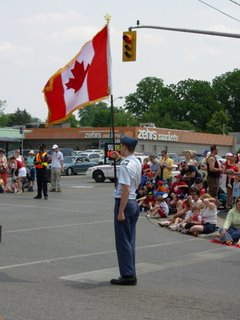 This young man stood at perfect attention for well over 30 minutes waiting to lead off the parade. He stood so tall and strong and unmoving. It really made me feel proud. 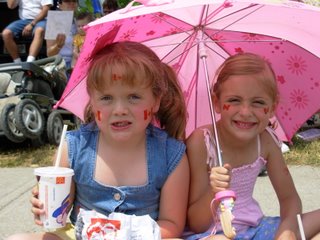 These two girls were sitting beside us, and mom and dad said I could post this photo of them enjoying the parade. They had a blast, especially when they were handing out free freezees! Did I mention it was hot? 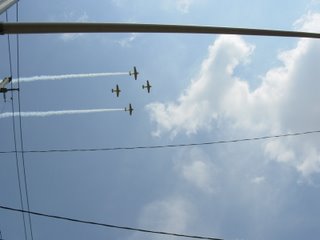 The flyby was really neat. Especially since they actually came by four times! 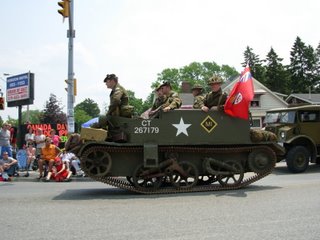 These poor young men spent several sweltering hours in authentic WWI uniforms to go with the equipment. Authentic, wool uniforms! I sure hope they had a cooler hiding in there with cold water for them.

Sounds like you had a fantastic time back home. Thank you so much for the threads, I haven't been able to get my email to like yours this past week and I can't log into my own gmail for some reason - I'm blaming the weather, another friend of mine is having similar problems and she's with another ISP.

You are absolutely welcome. I was out at the craft store one afternoon after reading some of the stuff you were going through and they were on sale. A little light bulb went off, and an RAK went in the mail in the morning!
Heather
PS The stickers for Marion will glow in the dark if left in the light for a while to 'charge'.